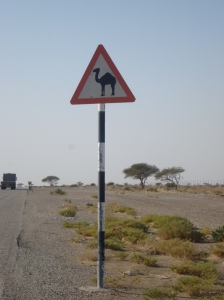 Not all Arab countries are created equal—most of them have oil as a big part of their identity, but for some it’s the oil that runs cars and for others it’s the stuff the comes from olives.  A couple of them, like Algeria, have both.  Sometimes the contrast between Arab countries is minimal, such as within the Levant countries, give or take different versions from town to town of dishes utilizing that vital olive oil and cities with varying degrees of nightlife.

Today I’m in Jordan for a few days, and when I saw the people shoving each other around in the Amman airport, it made think about how people were so much more polite at the Abu Dhabi airport.  Then I started thinking of more differences:

1.    The General Population:  The majority of the people who live and work in Jordan are Jordanian citizens.  Only something like 17% of the population in Abu Dhabi is local, the rest coming from every other continent but Antarctica (although that could change when the new wild refugee opens in a couple of years, and some penguins come over)
2.    Dress Code:  In Abu Dhabi, most Emirati women wear the black abaya and shala and the men the white thobe and headdress.  In Jordan, you’ve got a little bit of that, a little bit of backless mini dresses, and plethora of headscarf (hijab) options, from colorful and far flung to a dour, tightly wrapped cream one, some worn with long dresses, some worn with tight jeans.
3.    The Desert:  Abu Dhabi’s desert is lush hills of crystal brown against an endless horizon.  Jordan’s desert is mountainous, tinged with red rocks and ridged white rock. And for practical living purposes—Abu Dhabi’s is not a dry heat.
4.    The Fruits and Vegetables:  In Abu Dhabi they come from as many countries as the people, but they don’t survive as well.  Either you can buy a bruised sad apple from Syria or a perfect one from the U.S. that is so preserved it would probably survive a nuclear attack.  In Jordan, you can always find a farmer who has plopped himself on the side of the road to sell his excess of strawberries or cucumbers.
5.    Employment:  Abu Dhabi has a lot, Jordan not so much.
6.    Cigarettes:  People in Jordan still smoke like life is a Humphrey Bogart film, and in Abu Dhabi, you see almost no public smoking.
7.    The Mosques:  Abu Dhabi has a lot more, and the call to prayer is always heard—you can literally set your clock to it.  In Amman, your ears have to tune into it.
8.    The Camels: Again, Abu Dhabi has a lot more.  Enough that they have camel crossing warnings on the UAE highways.  Think of a deer and then think twice as bad.
9.    The Tourists:  The ones in Jordan come to see ancient ruins and biblical landmarks.  The ones who come to Abu Dhabi want to go sand duning, see the camels, and explore the sleek, modern wonders of Dubai.
10.    Traffic:  People in Abu Dhabi complain that everyone needs to go traffic school, but those people haven’t been to Jordan.  People in Jordan complain about the same thing, but those people haven’t been to Abu Dhabi. 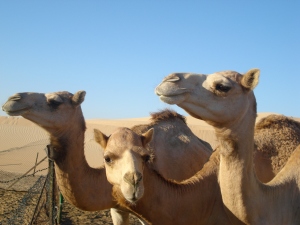 Not all Arab Countries Have Camel Crossings

2 thoughts on “NOT ALL ARAB COUNTRIES HAVE CAMEL CROSSINGS”