I’m in Obervellach in southern Austria, population 1,500, where the hills are alive with The Sound of Music—the movie that is.  Everywhere you turn, you’re waiting for Julie Andrews to come twirling down the mountain or the Von Tramp children to pop out of the bright flower boxes on the Alpine homes and break into song.  It is Sound of Music picture perfect.  Turns out the folks around here aren’t big fans of the movie, in the way Irish people don’t dig Frank McCourt’s Ireland.  They’d rather you go home talking about the amazing views from the alm—yes, just like Heidi’s alm– where the cows are sent for the summer and everyone can practice yodeling, hiking through waterfalls, swimming in the incredible lakes, embracing local gossip at one of the pubs along the river over lemon beers (not being a drinker is just one of the many ways I’m an obvious outsider here), eating ice cream sundaes the size of mini Christmas trees.

I’m not in Abu Dhabi for sure, but that’s not to say there aren’t some similarities between Abu Dhabi and a small Alpine village, and I’m sure that’s just not too much fresh air talking: 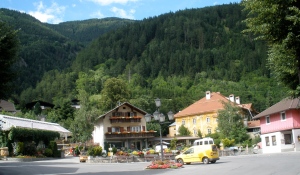 Living in the Sound of Music

Abu Dhabi or the small Alpine village would have done fine for the occasion.  Weddings are a big deal in both.