Screenplays vs Novels in Seattle 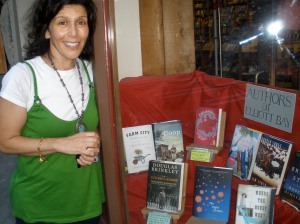 I gave a talk in Seattle this weekend at the Pacific Writers Network Association annual conference on taking a novel into a screenplay.  As is fairly typical of me, I got into Seattle with half an hour to spare for set up and then my traditional technological meltdown began –this time actually not my fault, as it was the conference center that didn’t have the hook up to the projector for my Mac.  So, as I frequently do, I found myself looking at roomful of people looking at me and me apologizing for a technical glitch.  In compensation, I said I would e-mail them the notes.  Instead, I’ll blog the basic overview of our conversation on scripts and novels.

1.    The explanation for a novel can be more than a couple of sentences.  The explanation of a screenplay should be done in one quick sentence called a logline.  Know your logline before you take your novel to screenplay because anything that follows out that logline will in all liklihood not belong in your screenplay.
2.    Remember that a novel is largely a solitary activity in its execution and consumption, whereas a screenplay is part of the collaborative effort of filmmaking, with the goal of it being seen in a group, rather than solitary, setting.

3.    Resist the temptation to preserve much of your novel by dumping it into flashbacks and voiceovers, which can be quite deadly to screenplays.

4.    A novel can take any narrative form you like (whether others like it is debatable.  A screenplay follows a very clear three-act structure with three major turning points, a mid-point, a set up, an inciting incident, a climax, and a resolution, which is more elaborately explained in the two screenplay textbook basis, Screenplay by Syd Field and Making a Good Script Great by Linda Seager.  (There are several other good books on screenwriting, but these two in my opinon are the essentials)

5.    Keep in mind that television writers live in LA, with very rare exception.  Film writers could possibly live outside of a LA, but also rare unless they have at least done some time in LA.  A novelist can live anywhere she likes but will find that the business center of publishing is New York City.

6.    Agents are interested in projects that already have a producer, director or actor with expressed interest, and producers are looking for writers attached to agents.  So one of the best bets for getting around this vicious circle if your uncle—or least very distant cousin–isn’t Steven Spielberg, is to enter screenwriting contests. Some great choices, all very competitive but open to the general public, are the Nichol Fellowhips, Zoetrope Screenwriting Competition, Carl Sautter Memorial Award.

7.    If a production company asks for your script, it will probably be read by a reader, a hard working writer who is paid little to critique you script for the company.  Readers are quite savvy and often jaded and busy.  They don’t have patience for scripts that don’t grab their attention quickly.  Readers evaluate scripts for plot, theme, setting, pacing, character development, and dialogue.

8.    Unlike novels, scripts should have short scenes, short dialogue, and short narrative descriptions.  Write and rewrite and rewrite until you get there.  Don’t send out anything but your best work as you only get one chance with an agent or producer.

9.    You can’t write novels or scripts without reading a lot of each.  Novel are at your bookstore.  Scripts can be found a Drew’s Script O Rama (website), French’s Bookstore, and maybe eBay.

10.     Stay on top of what is going on with screenwriters by reading trade magazines such as Variety and the Hollywood Reporter, as well as magazines such as Scr(I)pt.  Be involved in screenwriter organizations, such as the Scriptwriters Network.  These are great places to workshop your scripts, something perhaps not necessary for novels but in my humble opinion essential to screenwriting.