Independent film is hard to come by in Egypt, and so I really wanted to love Heliopolis, by first time director Ahmed Abdulla and starring
Egyptian heartthrob Khaled Abol Naga.  And I was all pumped up, 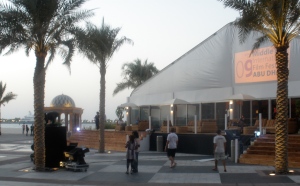 as I ended up sitting in front of Abbas Kirostami and Joan Chen, who are the
festival’s jury.  The filmmaker loves Heliopolis, and that is obvious in the beautiful shots of it he was able to capture, despite the neighborhood’s decline.  And the film is in fact about the neighborhood’s decline, a decline he seems to attribute to a general malaise and hopelessness that has taken over Egypt’s dwindling middle class.   But ultimately, a film needs a story, no matter how charmingly shot the vignettes, were, and there was no story to hook us.   No one walked out because there was a bit of hope that a story would emerge but by the end, you were just praying there would not be another snippet of a vignette.