For years, my friend Hala Gabriel has been working on documentary about the destruction in 1948 of Tantura, her family’s picturesque village in what was then Palestine.  For a Palestinian to even attempt such a project as hers is to face unfathomable odds, which she has.  Finally, she was able to get to Tantura in what is now Israel to film the remaining footage. Below with her permission is the letter she sent to her friends upon returning to the US.  It is unedited, including the photo.

Believe it or not, I just returned from my trip to Israel.  I finally did it.  I filmed the remaining things I needed in Israel for 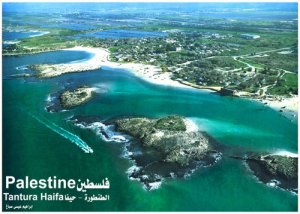 my documentary.  I even met with several of the soldiers who invaded my dad’s village Tantoura, exactly as I intended to do.  I met the Israeli general who was on the front line.  One Israeli soldier actually sent “greetings” to my great-uncle.  He recalled him well.  They all very old men now and I am lucky to find them before they die… I was there only 6 days, but I have to say that was emotionally enough for me.  I got back this afternoon and I’ve been sleeping most of the day.  It will take me a while to process the experience.

The Palestinian situation is much, much worst than I ever imagined.  It’s much worse than the news can even describe.  It’s indescribable to be honest and I didn’t even see the worst of it – I didn’t see Gaza.  What I saw was a refined cross between concentration camps, prison camps and a form of modern day slavery.  The Palestinians I met wouldn’t dare to speak to me of their life in front of the camera.  Not even the distant relatives would.  They live in constant fear.  One of them told me that he spent 2 and a half years in prison when he was 12 years old  for throwing a stone.  That’s where he learned Hebrew.  He said he would prefer never to speak Hebrew, but since he’s not allowed to own his own business he has to speak Hebrew to his Jewish boss.

My amazing Israeli/Jewish cameraman Amir I hired, he gave us the grand tour as he videotaped and documented along the way.  As he explained and showed us – The majority of Palestinian villages throughout Israel are sealed off with prison style walls (in fact the same architect that designs the actual Israeli prisons designs these despicable walls!)  Most villages have only foot access entry and exit – usually only one and they are heavily monitored.  Palestinians in the occupied territory are given green license plates for their cars while Jews have yellow – this is to enforce the “Jew” only roads.  I met one Palestinian man at the Ramallah check point who was born in Jerusalem.  He told me on camera that although he was born in Jerusalem they will not give him “citizenship” of Jerusalem, not a Palestinian or Israeli “citizenship”  – he only has a “residency” green card even though he was born there and all his ancestors were born there.  If he leaves Israel for more than 3 years he will lose his residency.  Although he is in his 40’s, he is not a citizen of any country even though his entire family history was in Jerusalem.

I visited the ‘Atlit’ prison camp where my father, uncles and grandfather where held for one year in 1948 after Tantoura massacre.  Ironically that prison was built by the British to incarcerate the Jews.  A portion of it is now a museum.  We took the “tour” and were not surprised that the tour guide some how had no idea what the camp was used for between 1948 and 1951.  That part of its history was some how “missing” or “erased” from the records – as so much of the Palestinian history was.  I so wanted to tell our tour guide that my father too was held there, but I became afraid – so did the Jewish friend I was with.

I traveled to Israel with a Jewish friend from the US named Frederick.  He had never been to Israel before and had no interest in going.  But he was interested in helping me doing my project, the reason why he agreed to join me.  It was astonishing how differently the immigration officers handled him versus how they handled me.  His family were holocaust survivors from Germany and he understood firsthand the meaning of atrocities , racism and ethnic cleansing.  He told me at one point that he was ashamed to call himself Jewish. He also pointed out that the Israeli’s have successfully managed to recreate the Warsaw ghettos.  I was certain that had not asked him to travel with him the Israeli’s would not have let me in at all.  They questioned me for 7 hours at the airport.  They repeatedly called me a liar.  (Apparently a “tactic” as I learned from the “proud” retired Israeli soldiers that taken my family home.)  At the airport they took my belongings, my phone and they threatened me.  On the way out of Israel they strip searched me and dissected my suitcase.  They wouldn’t allow me to take it as carry on, although it was smaller then the carry-on that Frederick was permitted to take it in.  In fact, my suitcase never arrived to New York.  I’m not sure I will get it back or not.  Fortunately there was nothing of great value but it’s the principle.  They also seem to have destroyed my cell phone.  It no longer holds a charge.

Having said all of that… my family village Tantura is beyond beautiful.  It is paradise on earth.  I always wished to be from a beautiful place and indeed I am.  The remnants of my family home gives a clue as to the aesthetic, thoughtfulness, wealth and beauty of the village and the homes that once were.  One of the Israeli soldiers I interviewed who saw the village a few months after they had taken it told me that he can’t describe in words how gorgeous the homes were.  It was a very rich village.  My family was very wealthy.  I understand fully why the people of Tantura continue to cry over 60 years later and long to return to their homes.  The majority of the villagers still live in refugee camps today.  My family is perhaps one of the very few that currently does not live in a camp.

As I wandered around the ruins of my family home, a fisherman approached.  He was apprehensive to speak to me at first.  He thought I was an Israeli.  When he learned who I was he gave me a hug.  When we left Tantura to the neighboring village of ‘Fradis,’ I was met with a crowd of people who are blood relatives.  Each one introduced themselves and explained how I am related to them.  A half-aunt named all her children after her brothers and sisters who she never seen again since the invasion 1948.   Their warmth and hospitality was beyond description.  They made a feast for me and my filming crew.  Delicious fresh caught fish from Tantura.  Before I left, one cousin called to say good-bye and to let me know how much the family loved me.   They know that the chances of Israel ever allowing me to enter again is minuscule.

My heart is so broken.  I bleed in pain for the people living under the occupation and the Palestinian “Israeli’s” who live in a daily horror of fearing for their life and livelihood in the quest for simply being.  The Jewish Israeli’s who are aware of the horror also live in their own prison camp and ghetto – it just has better amenities then the Palestinian villages as they described it to me in their own words.  They told me that it’s easy to live in the Tel Aviv “bubble” which they also described as the “Disneyland” or “Miami Beach” that Israel sells to the world.  There is even a separate road from Tel Aviv to Jerusalem that avoids the horror of the walls, barbed wire, occupation and imprisoned villagers.

I met a lovely gal at the hotel who told me she had only heard about people like me, but never met any Palestinian whose family was expelled.  It was like an urban legend.  She is originally from Holland.  She gave me her contact information and asked to stay in touch, unfortunately it’s in my suitcase.  I may have to call the hotel later and see if I can get it again.  Even my sound technician , was n Iraqi Israeli Jew told me he had no awareness of the history of Palestinians like myself.  They don’t teach it in Israeli schools.  In fact they are working on creating a law that will make learning about the “Nakba” (the Palestinian disaster) an illegal act.  He told me he had trouble sleeping the last several nights after shooting.   He hugged me and said he hopes I will find peace after this.

I am not sure when I will find peace, but I pray that my film reaches the appropriate audience.  I pray that it is relevant.

I still need funds to complete post production.  If anyone has any idea’s or any access to fund resources, I will be deeply appreciative.  If anyone would like to contribute to my project, any amount is most welcome.

Each person I have emailed has listened to my story and my project and has offered support along the way.  I thank  each of you.

I feel that I must cry now…