In the last years of my dad’s life, I spent a lot of time asking him questions about the Quran.  It wasn’t 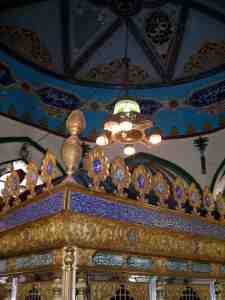 because either one of us was having a religious rebirth or even because it gave us some common ground together other than playing backgammon, although it did do that.  It was because my dad knew the Quran inside out, as it had been part of his upbringing.  I knew almost nothing about it, as that had been part of the upbringing he had given me.  After 9/11 and the consequent Islamanoia, I began to have to field questions about Muslims simply by virtue of being born one.  My dad taught me not to speak without having my facts in order, and so that was when I began my journey to explore the Quran.
While my dad hadn’t taught his kids much about the religion, I learned he was a strong believer, which he began to reveal to me in the passages we talked about and how inspirational and important they were in his mind for living a decent life.  I suspect his interpretations of several things, including alcohol and the hijab and ultimately death, would not have met with the approval of many Muslims, particularly here in the Gulf.  That aside, I think my favorite passage in the Quran would—or at least, should—meet with the approval of people from any religion, including atheists:

Beautiful in translation in this case means to show kindness and practice good deeds.  Or as Robert Frager, a Harvard-trained psychologist and Sufi, explains in The Wisdom of Islam: A Practical Guide to the Wisdom of Islamic Belief,  it is “acting with heedfulness, beauty, refinement, graciousness, and respect for others.”  Do what is beautiful just says it so simply.

In manic paced places like Abu Dhabi, where buildings and people and cars come and go faster than the rain, it is sometimes hard to keep focused on the beautiful, until some sad news reminds you of the reality that is sometimes hard to see out of the rabbit hole in this city that my friend Cindy calls “Alia in Wonderland.”

That’s why I like my friend Alicia Bessette and Mathew Quick’s blog, “Quest for Kindness” (http://aliciabessette.com/blog/) Sometimes just the phrase “quest for kindness,” just like “do what is beautiful” act as grounders.   Kind of like “Never a lender or borrower be” from Shakespeare, another source of wisdom my father loved to quote, reminds you to put your credit card away.