As kids, we grow up with clear imagery of what professionals in certain professions look like.  In my Sesame Street days, I learned farmers wear overalls with checkered shirts, nannies are British and carry parasols, and professional Arabs wear white robes and headdresses accessorized with grenade belts.  These images came to me from film and television, and I bought most of them, even with real live Arab parents there to counterbalance the TV Arab.

(Okay, there are some exceptions in which my childhood TV holds true—like waitresses at diners wear white aprons that tie at the waist.  This one persists as the whole diner concept has evolved into nostalgia for an imagined memory of American utopia.)

I wanted to make films, too.  But then I learned from TV that directors-are flamboyant, European, wear berets and ascots, have a cigar and carry megaphones when they talk—and are men.  So I thought about other possible dreams, as I knew that I could be convinced to shout in a megaphone but had no hope of being a man.

Then a person grows up and moves to Hollywood and finds out farmers, at least the organic ones, have pretty hip jeans and cool t-shirts, often with a marijuana leaf on them, the accent that nannies have is Spanish, and Arabs are the mostly like to wear overalls to work at the gas stations, if not wearing polo shirts as engineers.  And directors are indistinguishable from the rest of the angst-ridden people in Los Angeles—although they’re still most likely men.

But every once in while, your Hollywood childhood imagery is a pleasant memory that comes 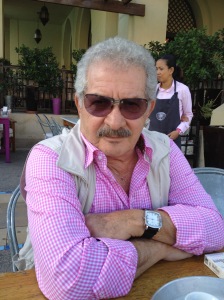 back to you– like it did when I interviewed Syria’s most acclaimed director Nabil Maleh, during which he gave me a photo of himself as a young director.  There was the beret, megaphone, and still to this day an endearingly larger than life personality.   He has never been a farmer, but on the day of our interview he was the one wearing the checkered shirt.

A Leopard in Winter:  http://www.jadaliyya.com/pages/index/9845/a-leopard-in-winter_an-interview-with-syrian-direcn

What is more important in a library than anything else – than everything else – is the fact that it exists.  ~Archibald MacLeish, “The Premise of Meaning,” American Scholar, 5 June 1972

The other day in Jordan, my mother made the day of a young Spanish woman with whom we were chatting by telling her she could be Audrey Hepburn’s double.  This was true enough, but what struck me was how quickly the woman

blushed and said thank you,  banging on her tea cup to make sure her boyfriend had heard the compliment.  Audrey Hepburn was before my time, let alone this younger woman’s.  Yet the three of us shared a common language:  Hollywood films.  What we didn’t learn of this language on the big screen or at home, we were taught via the video store, TV, or iTunes.   Or for those of us who wanted to perfect the language, our knowledge grew through classes—and through access to a film library.

Jordan’s Royal Film Commission is in my favorite part of Amman, Rainbow Street, which fits because the street is named after the city’s first cinema, the Rainbow Theatre, now long gone. I love the film commission because it has given Jordan a genuine film fan and filmmaker community.

But perhaps more uniquely, it has a cozy film library over looking old Amman.  It’s not big or comprehensive, but if you’re looking for film that brought Syrian cinema to an international audience in 1972, you can scan the shelves and find it:  The Leopard.  Arabic films have a language of their own and very few people learn it because the Middle East has no significant film library and no effort has been made to educate students about Arab cinema.

While everyone laments the decline of reading in the world, particularly the Middle East it seems, one forgets that good libraries also house novels and films, perhaps both truer windows into who we are and who we were than any text or history book could ever be.

Before Kramer vs Kramer made divorce a topic to carry a movie or Broke Back Mountain told of the tortured deceits of closeted homosexuality, Egypt’s most famous actress Faten Hamama was dealing with them in the 1974 film Oridu Hillan  (I Need a Solution) . (Honestly, I haven’t seen it recently, so I can’t verify the gay issues that my cousin said were implied in the divorce.)  The movie in fact changed Egypt’s divorce laws.

When looking for the roots of today’s revolutions, much of it can be found even in the poorly produced and directed very broad comedies and melodramas of Egypt over the past decade—rife with farcical scenes about men not being able to afford marriage because jobs are always illusive, scenes government institutions and the absurd rules applied to the Everyman when he tries to feed his family or take care of their health needs, and scenes of the brutal consequences of speaking out against the corruption.

Arab cinema is not always at level of most Western cinema, but it has a long history that lays scattered—and damaged by time—because libraries don’t have the importance they should.   Arabs have a long film history that is their history.  Yet sadly, Arabs don’t have as much as they should a language in which they can say, “You remind me of Faten Hamama in….”