When the earthquake hit Japan, it was as if it had hit one of the many cities I’ve lived in.  The horror of it 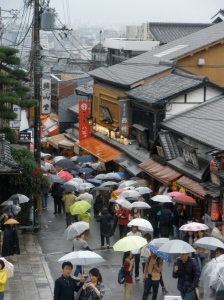 would have moved even the coldest heart but I also reacted to it–and still react to it– like it had hit so close to home, although I have never lived in Japan.  Well, not really.

I have never lived in Japan.  But during my last six years in Los Angeles, I used to go to Japan and Korea every morning.  That was how my sidekicks, the other English teachers at UCLA, felt at 9 a.m. when we would walk into a classroom that often was 100% Japanese or Korean.  In the afternoon, we left Japan and went back to Los Angeles to direct, write, perform, compose—whatever the teaching gig was helping us fund.

People always say teachers learn as much about life from their students as the other way around, but I didn’t realize how much those mornings in Japan were as much lessons for me as they were for my students until I finally made it to the actual Japan—1001 students later—probably double that—last November for a conference.  Unlike the other foreigners, I didn’t walk into stores with my umbrella open, I didn’t cringe at the texture of the deceptively pretty bean cakes in the Kyoto shops, I didn’t use a spoon to drink my miso soup, I wasn’t shocked by fully grown women dressing like teenagers and teenagers dressing like little girls.

While the other foreigners at the conference were feeling like they had landed in an exotic wonderland, I was completely comfortable with Japan’s odd balance of delicacy and harshness–the elegance of the presentation of food and even credit cards (although they rarely accept credit cards), the careful wrapping of everything, the orderly standing in line for the subway, the pristine washlets, the bowing at every turn juxtaposed against the lack of eye contact and friendly banter, the love hotels, the garish Halloween and Christmas decorations competing with each other in a country where neither holiday has any cultural or religious significance aside from being a reason to celebrate . I even knew how to eat the nato at breakfast (not that I enjoyed it).  I was aware the pork was their lamb, unlike some of the Muslims at the conference who found the ramen noodles had an odd taste. I didn’t think the restaurant didn’t know what time it was when we were served rice and pickles at breakfast. The Osaka octopus balls and cuttlefish pancakes were indeed different then their US imitations.  I was even ready for the separate cars for men and women on some subways, the one thing that reminded me of the Middle East.

I loved being in this country that I had already spent so much time with in LA.  The moment I realized teaching had made me Japanese was when I ordered the food at the Korean restaurant in Osaka for my colleagues and remembered my Korean students born and raised in Japan, many of whom had families that owned such restaurants. While the others couldn’t make sense of the menu, I ordered us a great meal because teaching had also made me Korean.

What my students didn’t prepare me for was the lack of English in much of Japan. Since the one thing I had to do in class every day was teach English, I expected that our students had gone home and multiplied.  Where were those students hiding?  Could it be that they had taught us more than we had taught them? Very likely.

They had certainly taught us that in Japan it is not okay to air your emotions in public, as heartbroken female students would tell me in a torrent of tears they were hiding from their classmates about some guy they had met in LA,  and so the stoic faces masking all the grief of Japan today on TV doesn’t surprise me as it does others here in the Middle East, where emotion is literally spilled onto the street everyday–especially these days.  But grief is grief no matter how you express or don’t express it, and today in Japan and the Middle East there is much grief but also much resolve and determination, just for different reasons and just expressed differently.